Seminars and the Clueless

I'm just back from a seminar entitled "Why write romantic fiction in medieval Byzantium?" which seems a fair enough question. It was presented by Medieval Studies but I went along anyway- it sounded interesting. 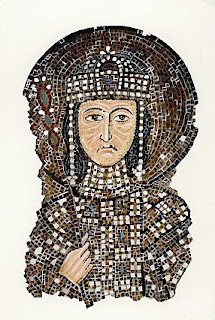 Now, I was fortunate and able to study Latin at school. It remains the single most useful subject I studied before university. I also did Latin in my first year of uni. I scraped a pass and decided that I had achieved all I was going to in that sphere so bid it a fond farewell. Anyway, at school my long-suffering Latin teacher tried to teach me classical Greek in sixth year. He was a patient man, of whom I was fond, but I just couldn't pick it up despite having one-on-one tuition. I never really assimilated the alphabet properly so reading anything involved a slow, painful process of first a clumsy attempt to mentally transliterate and then an even clumsier attempt to translate. We gave up after a few months, and he took early retirement at the end of the school year, his patience all but expired.

Perhaps when I am old I'll give it another go, but probably not (unless I can find a classicist I want to punish).

Anyway, what I hadn't thought of beforehand today was that Byzantine literature would be in Greek (I don't know what language I thought it would be in other than Greek, mind you). The speak also (reasonably) expected some prior knowledge- this was a postgrad seminar after all. I, however, was not in any sense up to speed. Although I could follow the argument, the finer points were lost on me and my attention was drifting somewhat. For me, it fairly quickly turned into a very learned woman saying Greek words, some of which were names, some of which were... not. It didn't make much difference to the Hellenically-backward in her audience.

I wrote down the name of her book, but I'm never going to read it.